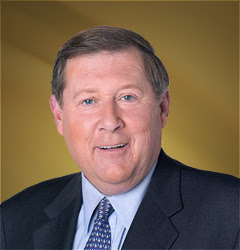 Mark Haines distinguished himself today with a level of partisan stupidity that was impressive even by CNBC standards. The subject was whether allowing banks to repay TARP money might leave them with insufficient capital to withstand continued deterioration in the economy. Bloviated Haines "I can’t help but be cynical about this, sounds to me like the government just wants to keep their hooks in them." When Steve Liesman pointed out that the administration has a lot of things it would rather be pursuing than babysitting banks, Haines answered "It certainly appears to me that the government is relishing the power it has right now."

What a dumbass! No one who voted for Obama wanted him to have to devote this much effort to keeping the banking system afloat just as no one wanted to see him having to spend this much time keeping the auto manufacturers from collapsing. No one is happy about this.

Haines demonstrated his ability to throw the last two years down the memory hole with his insistence that the banks should be able to pay back TARP funds even if it left them undercapitalized. "If Jamie Dimon or Blankfine or whomever wants to give the government its damn money back, I don't see how that's a problem. . . . It's there bank. Do you think they want to drive themselves off a cliff?"

They don't want to drive themselves off the cliff, but Wall Street bankers have demonstrated that they are perfectly willing to risk it in order to line their own pockets. In House of Cards: A Tale of Hubris and Wretched Excess on Wall Street, William D. Cohan details how the executives at Bear Stearns let things spin out of control rather than raise necessary capital that might dilute their control and decrease their bonuses. Wall Street bankers will be happy to put the financial system at risk by operating with insufficient capital if it means that they can go back to looting their companies.