From the Chicago Tribune:


An Arlington Heights man was fined $500 after he turned in $17,000 but lied about how and where he actually found the cash, police said Wednesday.

Robert Adams was cited for filing a false report with the Rolling Meadows Police Department.

On the evening of June 6, Adams found a Chase Bank bag of cash totaling about $17,000 near an ATM at a Walgreen store in south suburban Midlothian, police said.

Instead of turning the cash in at that location, Adams drove to Rolling Meadows and turned in the bag at a Chase Bank. He later told police he found the cash outside a newspaper stand in Rolling Meadows.

Adams told the Tribune on Wednesday night that he felt more comfortable turning the cash in to Rolling Meadows officials and filing the report with Rolling Meadows police.

"I know now a little better than I knew then," he said. "I feel very badly and understand why I should have told the truth."

Adams said it was a hot day and he just wanted to get home. "I wasn't looking for a reward. I was just doing the right thing," he said. Adams said he did not get a reward for finding the money.

On Wednesday, Adams said he was told he had to pay a $500 fine for filing a false report.

Here's what I think happened: The guy's initial reaction was to keep the money. As he drove the forty miles from Midlothian to his home in Arlington Heights, his conscience got the better of him so he took the money to a Chase branch in nearby Rolling Meadows. He was embarrassed about having thought about keeping the money so he made up the story about finding the money in Rolling Meadows.

All he's guilty of is stupidity. What he should have said when he turned the money in was, "I wasn't sure what do and it was hard to think clearly with that much money in my car. I knew that there was a Chase branch in Rolling Meadows which is near where I live so I decided to bring the money there."

There Are Some Things the Government Should Run

Prisons are something that shouldn't be privatized.


Earlier this year, a Pennsylvania judge was convicted of racketeering, of taking bribes from parties of interest in his cases. It was a fairly routine case of bribery, with one significant exception. The party making the payoffs was a builder and operator of youth prisons, and the judge was rewarding him by sending lots of kids to his prisons.

From Who Wants to Keep the War on Drugs AND Put You in Debtor's Prison by Matt Stoller.

Stoller quotes this interesting passage from a recent 10K filing from The Corrections Corporation of America:


The demand for our facilities and services could be adversely affected by the relaxation of enforcement efforts, leniency in conviction or parole standards and sentencing practices or through the decriminalization of certain activities that are currently proscribed by our criminal laws. For instance, any changes with respect to drugs and controlled substances or illegal immigration could affect the number of persons arrested, convicted, and sentenced, thereby potentially reducing demand for correctional facilities to house them.

It is hard enough to have a rational debate about drug policy or immigration policy without lobbyists representing corporations whose vested interest in seeing people thrown in prisons has nothing whatsoever to do with the danger that those people pose to society.
Posted by Vinny at 2:24 PM 3 comments

Snickering readers in New York or Los Angeles might be tempted by all of this to conclude that Bachmann is uniquely crazy. But in fact, such tales by Bachmann work precisely because there are a great many people in America just like Bachmann, people who believe that God tells them what condiments to put on their hamburgers, who can't tell the difference between Soviet Communism and a Stafford loan, but can certainly tell the difference between being mocked and being taken seriously. When you laugh at Michele Bachmann for going on MSNBC and blurting out that the moon is made of red communist cheese, these people don't learn that she is wrong. What they learn is that you're a dick, that they hate you more than ever, and that they're even more determined now to support anyone who promises not to laugh at their own visions and fantasies.

If suspect he's right and it scares me.  The more that Bachmann, Palin, and Perry show themselves to be buffoons, the more beloved they become.
Posted by Vinny at 8:32 PM 0 comments

Tim Pawlenty Wants the Rich to Get Richer

My father used to say that Ronald Reagan's genius was in convincing so many members of the middle class that they could afford to vote Republican.  I wonder how many people will be convinced by Tim Pawlenty.

Appearing on CNBC's Squawk Box this morning, Pawlenty proposed cutting top income tax rates and getting rid of taxes on dividends, capital gains, interest income, and estates.  According to Pawlenty, these tax cuts would pay for themselves by sparking GDP growth of 5% per year for ten years.  Never mind the fact that sustaining that kind of growth for that length of time is a pipe dream.


So wouldn't such policies likely increase wealth inequality in America?  Sure but Pawlenty doesn't care:


The measure of a successful economy is not whether some small percentage of people get a little more wealth or a little less wealth. . . . I don't care if we shift the wealth a little this way or that way. . . .  Don't measure this by whether of few more people get a little wealthy or not.

Pawlenty made it clear who he is looking out for,  "Every business leader across every sector of this economy large or small across the whole country that I meet with says essentially the same thing,  'Get the government off my back'."   Like the way that government got off Wall Street's back over the last thirty years?  How did that work out?
Posted by Vinny at 9:16 AM 0 comments

In a speech today in Chicago, Republican presidential hopeful Tim Pawlenty is expected to play the class warfare card according to The Huffington Post:


"President Obama is a champion practitioner of class warfare," Pawlenty will say, according to advance excerpts. "He has spent three years dividing our nation, fanning the flames of class envy and resentment to deflect attention from his own failures and the economic hardship they have visited on America."

What pure and utter crap.  Any class envy and resentment that exists is the result of Republican economic policies of the last three decades which have made the rich richer while the American middle class stagnates or falls behind.

As the following graph from the Paris School of Economics shows, the richest 1% of Americans earned 8.18% of total income in 1980 when Ronald Reagan was elected.   (H/T The Big Picture) Today the richest 1% of Americans earn 17.67%.  Income distributions have been nowhere near as skewed in other major industrialized nations like Japan, France, and Australia.  During that time, America has gone from being the world's biggest creditor to its biggest debtor, median incomes have gone nowhere, and America's manufacturing base has deteriorated. 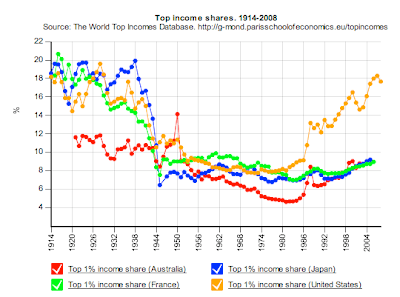 Pawlenty's prescription for the economy is more of the same policies that got us where we are today: tax cuts for the rich, less regulation of business, and further dismantling of the social safety net.

It would be nice to think that voters aren't that stupid, but the signs are not encouraging.
Posted by Vinny at 9:23 AM 2 comments