McCain Will Handle the Swift-Boating Himself

The Washington Post reports that the McCain Charge Against Obama Lacks Evidence. In fact, Obama never intended to turn a visit to wounded troops in Germany into a photo-op. In Iraq, Obama visited wounded troops with no media coverage whatsoever. The media found out about that visit from the military, not from Obama's campaign.

"I know that, according to reports, that he wanted to bring media people and cameras and his campaign staffers," McCain said. According to the Washington Post, the McCain campaign has been unable to produce any such reports. "McCain's advisers said they do not intend to back down from the charge, believing it an effective way to create a 'narrative" about what they say is Obama's indifference toward the military."

Sadly, lies often are effective. Unlike Bush, McCain isn't even trying to hide the fact that he is the source of the smears. So much for the "Straight Talk Express."
Posted by Vinny at 10:08 AM 1 comments

Was Obama Wrong to Oppose the Surge?

If not for Democratic opposition to the War in Iraq and the American people voting Democrats into office, there would be no surge. Had the Republicans maintained control of Congress, Bush would have stuck with Rumsfeld. Bush did not dump Rumsfeld and switch strategies because he thought he had done anything wrong or because he trusted McCain's leadership and judgement. He did so because the American people demanded a change by electing Democrats who would oppose the failed policies Bush had pursued in Iraq.

So while the surge has turned out better than many (including me) predicted, opposition to the Administration's conduct of the war is the only reason the surge ever came about in the first place and no one need regret that opposition.
Posted by Vinny at 4:01 PM 9 comments

"A 92% average stability of the text does not seem to support the idea that the text has been 'radically altered'.” A Response to Bart D. Ehrman's Misquoting Jesus by Dr. Thomas Howe, Southern Evangelical Seminary.


Maybe not Dr. Howe, but does 92% average stability support the idea that the New Testament can be relied upon as the inherent and infallible Word of God? 8% instability is about one in twelve, or the odds of rolling a four with a pair of dice in a game Monopoly. Imagine you are the battleship and you are sitting on Atlantic Avenue, but instead of landing on Go to Jail if you roll a four, you land on Go to Hell. You go to hell because there was a one in twelve chance that a verse necessary to properly understand the doctrine of water baptism had been miscopied by an early scribe and you were sprinkled when God wanted you dunked.

When an airline mechanic is checking out an airplane, I want him to be working from schematics and diagrams produced by the plane's manufacturer. I don't want him working from some lecture notes that were recopied several times before he got hold of them. 92% stability isn't going to cut it. The original autographs of the books of the Bible are purported to contain the rule of God for man's faith and life. Properly understanding and applying its teachings determines whether a person spends an eternity in bliss or torment. I wouldn't expect any Christian to get on an airplane with those odds, and I don't see why any Christian would expect me to chance my eternal fate on them.

Of course the apologists respond that the truly essential teachings do not depend on any single verse, but are supported consistently throughout the scriptures. Is this true though? Don't extremely important theological points often depend on a single passage or even a single word? If that passage can only be assigned 92% confidence, what happens to inerrancy and infallibility?

For example, belief in the inspiration of the New Testament relies heavily, if not exclusively, on 2 Peter 3:15-16:

Bear in mind that our Lord's patience means salvation, just as our dear brother
Paul also wrote you with the wisdom that God gave him. He writes the same
way in all his letters, speaking in them of these matters. His letters contain
some things that are hard to understand, which ignorant and unstable people
distort, as they do the other Scriptures, to their own destruction.

Had Peter not referred to Paul's letters as "scripture," Christians would have little if any basis for claiming that the New Testament holds itself to be on a par with the Old Testament as inspired scripture.

As far as I know, there may well be no significant known variants in the early manuscripts of 2 Peter, however, some might consider the book itself to be one big variant. Most modern scholars doubt that Peter wrote either of the epistles attributed to him, but 2 Peter has been in doubt since the first known reference. This occurs in Eusebius' Eccleiastical History written at the end of the third century where he lists it among the "disputed" writings rather than the "recognized" ones. Athanatius included in his Festal Letter of 367 A.D., but the Syrian Christians never accepted it as part of their canon. Somehow, I think the confidence level for the entire book would have to be considerably less than 92% before even considering the possibility of scribal errors.

There is nothing unusual about important doctrines resting on a single ambiguous passage. As I noted in a post last week, the evangelical Christians argument that the New Testament supports capital punishment seems to rest entirely on Romans 13. While their reading of that passage strikes me as more than a little strained, I suppose the odds that the scribes altered the meaning of this passage isn't going to bother anyone who isn't already bothered by the rate of mistakes made by prosecutors and jurors in death penalty cases.

Sometimes a key theological point can rest on a single word. In a post several months ago, I noted the significance that Gary Habermas attaches to Paul's use of the Greek word "historeo" in Galatians 1:18 which describes his meeting with Peter and James in Jerusalem three years after his conversion. According to Habermas, it is this word choice that ties what Paul believed and taught to the the original eyewitnesses to Jesus' life and ministry. I personally don't find his argument terribly persuasive, but even if I did, roll a four and this may be one of those verses that was corrupted by one of the early scribes. The earliest surviving manuscript of Galatians dates from 150 years after Paul wrote it--a lot of trips around the Monopoly board.

The Bible may well be the best attested text in antiquity, but that really isn't saying that much when it purports to be the source of absolute truth on every topic it touches. 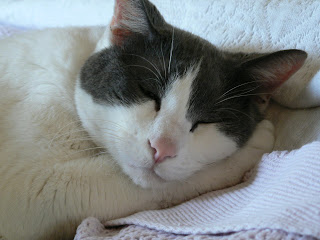 I had Tootle put to sleep today. I took him to the vet a couple weeks ago because he had been losing weight. The vet said he had a tumor on one of his lymph nodes and prescribed some steroids to shrink the tumor and some appetite stimulants. Tootle seemed to perk up at first, but over the last few days he had barely moved. He did not resist when I put him in the carrier and his mewing was barely audible as I drove to the vet.

Tootle was the most gentle, sociable and tolerant cat I have ever known. He would put up with a great deal of poking and prodding from small children. When he had enough, he would simply get up and walk away. He rarely hissed or scratched.

The Bible and Capital Punishment

A few years back, I was listening to a Christian radio station in my car when some pastor cited Romans 13:3-4 to show that capital punishment could be supported from the New Testament. He said “Paul could not have been any more clear.” When I got home, I pulled out my Bible to read it for myself:

For rulers hold no terror for those who do right, but for those who do wrong. Do
you want to be free from fear of the one in authority? Then do what is right and
he will commend you. For he is God's servant to do you good. But if you do
wrong, be afraid, for he does not bear the sword for nothing. He is God's
servant, an agent of wrath to bring punishment on the wrongdoer.

I could not help but think that Paul could not have been much more obtuse if it was truly his intention to endorse the death penalty. Most Christians don’t seem to believe that Proverbs 13 requires them to use an actual rod to whack their children. Why should they believe that Romans 13 requires a literal sword and literal bloodshed rather than seeing the sword as merely symbolic of the state’s right to punish criminals?

Jehovah was very big on killing people who displeased him in the Old Testament, but it seems to me that Christians who want to use this to justify the death penalty have to do a lot of cherry picking. For example, the Old Testament prescribes the death penalty for blasphemy, adultery, homosexuality, witchcraft, and disrespect for parents. Moreover, it prescribes stoning and burning as appropriate methods of capital punishment. I don't really see how the Old Testament can be used to establish the inherent morality of the death penalty without also accepting that it establishes the crimes to which it should be applied and the methods by which it should be carried out.
Posted by Vinny at 9:08 PM 8 comments

Who is Exploiting Who?

Saturday's Wall Street Journal provides further insight into the conservatives' understanding of "exploitation." In an editorial concerning contracts between the Iraqi government and the major American oil companies the Journal noted that "Many Iraqis remain suspicious of outside oil companies – the legacy of a colonial past in which Iraq felt exploited for its oil."


I wonder why the Journal couldn't just refer to the "the legacy of a colonial past in which Iraq was exploited for its oil"? Is it really necessary to temper it by suggesting that it was only a feeling that some Iraqi's had? I can't help but think that the inability to fully acknowledge the historical fact that Western democracies have behaved badly in the Middle East has contributed to the misguided policies of the current administration.

Perhaps we need to send Phil Gramm over there to explain that it was really Iraq that exploited the major oil companies.
Posted by Vinny at 6:07 PM 1 comments