Try to imagine the picture of the historical Jesus that emerges from a rigorously, historical, critical examination of our surviving sources as a large tapestry. The individual threads make up the overall portrait. There are a few threads here and there that appear out of place at first glance. But you can’t take these few threads and claim that they represent the overall portrait of the tapestry. The tapestry has to be understood as a whole, looking for the major features of its portrayal (and of course the stray threads need to be fit into it somehow).

The quote above comes from a blog post Ehrman wrote discussing Reza Aslan's book Zealot, which argues that Jesus was actually a political revolutionary who advocated violent resistance to the Romans.  Ehrman finds Aslan's thesis unpersuasive.


The data that do seem to support the idea of Jesus as a political revolutionary are very, very few and far between. They do not comprise the majority, or even a significant minority, of the data we can establish as going back to the historical Jesus. 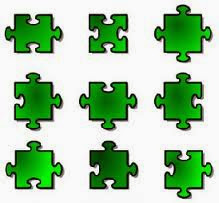 Now suppose that of our seventy-five pieces, sixty are green.   We might be inclined to conclude that the picture is some sort of landscape, perhaps a forest.  However, in order to justify this conclusion, we would need to know how we got those pieces.  If someone simply reached into the box and grabbed a handful of pieces, it might be reasonable to think that they are a representative sample and that 80% of the entire picture is green.  On the other hand, if someone grabbed the pieces from a single area of a completed puzzle, there would be less reason to think that green predominates in the whole.

Even if we could establish that some data goes back to the historical Jesus (which I doubt), Ehrman's argument presupposes that such data constitutes a representative sample of Jesus' words and deeds.  I cannot see  how such a presupposition can be justified.  The data we have is the data preserved by people who came to believe that Jesus was the prophesied Messiah who God had raised from the dead. They would have no reason to preserve anything about him that did not support that picture.  Had Jesus been a revolutionary Zealot, data that portrayed him as an apocalyptic preacher might still have been the only data that was preserved.  In fact, if you subscribe to the criteria of dissimilarity, those few data points that support the idea of Jesus as a political revolutionary may be the points that are most likely to be authentic as no one would have any reason to invent those.
Posted by VinnyJH57 at 9:55 AM 2 comments

Paul as Evidence for a Historical Jesus: HJA (29)

When my earliest extant source for Alexander the Great tells me that he is relying on contemporary biographers of Alexander, I take that as some evidence that information about a historical person was remembered and passed on. I may need to consider the possibility of invention or falsehood, but it is at least some evidence.

On the other hand, when my earliest extant source for Jesus tells me that he is relying on divine revelation, supernatural appearances, and centuries-old holy writings, I do not think that I can take that as any evidence that information about a historical person was remembered and passed on. I can consider the possibility that this occurred, but I cannot say that he has given me any evidence that it did. Moreover, I may even need to ask whether he hasn't given me some evidence that the opposite is the case.
Posted by VinnyJH57 at 8:11 AM 0 comments

Links to this post
Labels: Historical Jesus Agnosticism
Newer Posts Older Posts Home
Subscribe to: Posts (Atom)
No matter how cynical you get, it's almost impossible to keep up.--Lily Tomlin