From Todd Wood, a professor of science at Bryan College, a Christian college located in Dayton, Tennessee where William Jennings Bryan squared off against Clarence Darrow in the Scopes Monkey Trial:

Evolution is not a theory in crisis. It is not teetering on the verge of collapse. It has not failed as a scientific explanation. There is evidence for evolution, gobs and gobs of it. It is not just speculation or a faith choice or an assumption or a religion. It is a productive framework for lots of biological research, and it has amazing explanatory power. There is no conspiracy to hide the truth about the failure of evolution. There has really been no failure of evolution as a scientific theory. It works, and it works well.

I say these things not because I'm crazy or because I've "converted" to evolution. I say these things because they are true. I'm motivated this morning by reading yet another clueless, well-meaning person pompously declaring that evolution is a failure. People who say that are either unacquainted with the inner workings of science or unacquainted with the evidence for evolution.

Like his school's namesake, Wood accepts the biblical account of creation as a matter of faith, but he apparently has too much respect for his God-given capacity for rational thought to deny that the scientific method supports the theory of evolution.
Posted by Vinny at 9:30 PM 2 comments

Beginnings and Causes and God (2)

The virtue of the Kalmic argument for God's existence is that it avoids the problem of who created God by declaring as its premise that "Everything that begins has a cause." Without this premise, you would have a infinite regression of early and earlier causes without ever getting to a beginning cause.

In order for this little trick to work, the set that is composes of things that have a beginning must not be exactly the same as the set that is composed of all things. Otherwise, the qualifier "that begins" is meaningless and "everything that begins has a cause" just reduces to "everything has a cause." Therefore, an implied premise of the Kalamic argument must be "Some things don't have a beginning."

Of course, I don't see why an infinite being is any more satisfying than an infinite regression. As Alec pointed out in a comment to my previous post on this topic, man's brain is not equipped to deal with the infinite. Substituting one infinite abstraction is pointless.
Posted by Vinny at 6:39 PM 4 comments

Having a Deep Discussion 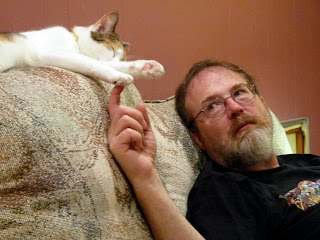 Beginnings and Causes and God

The Kalam argument for the existence of God goes something like this:

For example, the statement “all crows that are black have wings,” doesn’t have any more meaning than the statement “all crows have wings.” The statement seems to imply that wingedness has some connection to blackness, but unless we have some experience or knowledge of white crows, we have no reason to talk about “crows that are black” rather than simply “crows.” We are better off saying simply can say that all crows are black and have wings because it doesn’t imply any dependence of one characteristic on the other.

By the same token, if we have no knowledge or experience of things that don’t begin to exist, what basis do we have for thinking that there is some connection between beginning to exist and causedness. Our knowledge and experience at best warrants the inference that all things have causes.

I often wonder why skeptics don’t have clever little syllogisms like the Kalam argument. How about this one:

On every major measurement, the Census Bureau report shows that the country lost ground during Bush's two terms. While Bush was in office, the median household income declined, poverty increased, childhood poverty increased even more, and the number of Americans without health insurance spiked. By contrast, the country's condition improved on each of those measures during Bill Clinton's two terms, often substantially.

To all the wingnuts who are afraid of losing "their America," please recall who threw it away.
Posted by Vinny at 9:31 AM 4 comments

I just finished reading “The Co-Presidency of Bush and Cheney” by Shirley Anne Warshaw It is the story of two guys from Texas. One of them ran for President with little other purpose it seems than fulfilling what he thought was God’s plan for his life. The other one ran for Vice-President knowing exactly what changes he would like to make and how he would go about making them if he got the power to do so. Unfortunately, the first guy let the second guy have as much power as he wanted.

The key point in the whole story came early on when Bush put Cheney in charge of the transition after the 2000 election. While Bush followed the dispute over the Florida recount, Cheney was filling key slots in the new administration with appointees who would be loyal to him. Since Bush knew little about how Washington worked or foreign policy, he was happy to take Cheney's advice. Cheney was careful not to step on the toes of the loyalists that Bush brought with him from Texas, which wasn't that hard because Bush didn't have much of a domestic agenda beyond tax cuts and faith-based initiatives.

Bush never knew what hit him.
Posted by Vinny at 7:26 AM 0 comments

A friend of mine has been an auto mechanic at a dealership for thirty years. Fully paid health insurance has always been part of his union contract. Recently, the owner of the dealership threatened not to renew the union contract and to bring in non-union mechanics. My friend was shocked when I told him it would cost him well over $1000 per month to replace his insurance coverage. Many health care reform opponents would argue that union contracts like this that insulate the consumer from any understanding of the cost of health care have contributed to the brewing crisis. Even some supporters would acknowledge the problem.

I think one of the most disingenuous tactics employed by health care reform opponents is to cite the percentage of Americans who are currently happy with their health care. As I have noted in the past, people who are healthy would be happy with any coverage or no coverage at all. However, what makes this tactic even more devious is that the reform opponents know perfectly well that many of the people who are happy today will lose their coverage in the next few years due to rapidly escalating costs. Indeed, some of them might even welcome my friend's predicament as they blame unions for the problems.
Posted by Vinny at 10:00 AM 4 comments

The corporation is a socialist experiment:

Prior to this form of social insurance, the owners of a business were legally liable with their personal wealth for damages the business might have inflicted on others. With limited liability, the corporation’s shareholders are liable only up to their equity stake in the company. ... Beyond that, someone else in society — often the taxpayer — bears the financial risk for damages attributable to the corporation.

One wonders how many business executives and members of chambers of commerce ... realize that the limited liability of shareholders is social insurance.

Harvard business professor David Moss, quoted at The Econmist's View, When the Going gets Tough, the Tough Run to the Government.
Posted by Vinny at 9:46 AM 1 comments

Tale of the Tape

As much as I liked what I heard of the President's speech last night, it bothers me that the health insurance companies seemed to like it so well.